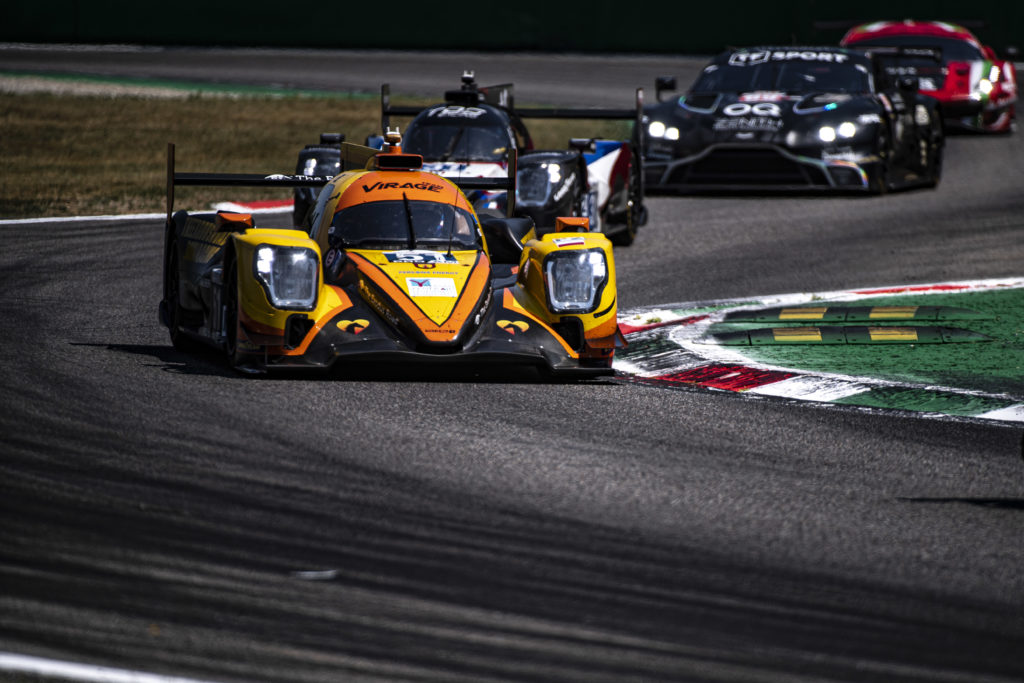 Technology, calculations, desk study of strategies, the ability to react to unforeseen difficulties and situations, and lots and lots of humanity. This is part of what we experienced inside the Team Virage garage, a team that competes in the European Le Mans Series, Le Mans Cup and Ligier European Series.

Specifically, we experienced from their own perspective the sensations and emotions of the “main event”: the 4H of the ELMS where Team Virage fields its LMP2 in the PRO/AM category.

No matter how fast press pass come and go, it is never a regular experience.

The pits are that magical place where the smell of ravioli with walnut sauce from the team members’ meal intersects perfectly with the scent of fuel and the acrid smell of worn rubber just taken out after a pit stop.

The calm and focused silence before the start, unreal, almost drowning out the distant mumbles of the cars ready to launch into the corrida.

The intensity of engine revs rising just like the hectic wait for the green flag. Hope and dread mixing in a tango of logical contradictions.

Wave the start and the fury of the hundreds of engine horsepower out there fills the atmosphere as we reach the first corner, the most delicate moment of the entire race. To nullify the effort of a weekend in a few hundred meters is a matter of moments, and all the apprehension can be read in the eyes at the back of the pits.

Rob Hodes (you can read our interview with him here), the starting driver for the team from which we watch the race start, is good at keeping out of trouble at the first hazard.

Thus begins the hunt for the rest of the positions.

“3,2,1 Full Corse Yellow,” a chant that becomes a mantra. By itself it can mean redemption for a difficult race or further complicate the situation.

The reaction of Gabriel Aubrie, one of the three leaders of the team along with the aforementioned Rob Hodes and Jazeman Jaafar, in the pits expresses all the will to win and the sorrow when the unfavorable situation complicates their way.

Passion and love for their jobs and for competition. Pilots are not machines, they are a fire teeming with passion.

“3,2,1 Full Course Yellow removed,” and the race resumes in its competitive value as the very kind team members offer us lunch. Simple gestures but full of humanity as the battle rages outside.

Rob Hodes’ inquiring and attentive gaze toward the timing screen as he finished his own stint and handed over the wheel to Aubrie for the comeback. Ah the clock so tedious, such a long but short time, especially in Endurance racing, more and more like today’s sprint lifestyle.

All of Team Virage’s effort is subtended to performance, from the start and by all means. The brawl in the Pro/AM category is no small thing.

It’s pit stop time once again, marked by the clanking of tire change carts. Mechanics donning helmets and challenging the scorching heat inside their fireproof armors. Tense gazes, losing a second during a pit stop is as easy as blinking, recovering it in the race can be a living hell. You have to be responsive, quick and decisive, no room for any inaccuracies that could cost you the race.

Mechanics are the heroes who we always talk about too little, performing superhuman efforts in ridiculously short times exposed to the constant risk of being mowed down by oncoming cars.

As the preparation for the pit stop happens I turn my gaze toward Jaafar as he stands by to complete the last rituals before being ready to enter the battle.

Calm, ritualized in small gestures, from stretching to the moment of putting on the balaclava and slipping on the helmet, a gesture capable of transforming the man into the pilot.

While the driver performs his rites, in the pit, engineers hone calculations to exploit every single useful window to gain an advantage over the competition.

In the blistering heat of a scorching Monza, the fatigued and tense faces are the perfect representation of a contest that was anything but easy for Team Virage’s boys.

The checkered flag marks the sixth place in the Pro/Am standing for the boys of the #51, less than what was hoped for but there is always next time to try again.

We bid farewell to the team guys at the end of the race as they begin the part of dismantling the pit to resume their own wandering around the world.

We would like to sincerely thank the guys from Team Virage that hosted us in their pits, especially Alex for giving us this opportunity and showing great consideration for us.